People who grow up in what used to be called the “Gold Coast” (Palm Beach, Broward and Dade Counties) take for granted their natural surroundings.  From the standpoint of most of the rest of the country, South Florida is an exotic paradise.  Growing up in that “paradise” has been a defining event for me: it’s moulded the way I look at life and the way I express that, especially with stuff like The Ten Weeks.

But that paradise is also fragile. The basic problem is that it is a victim of its own success; too many people agree with this, so they move there. The result has been development that has exceeded the ability of the region’s natural resources to support it properly.

These photos come from an earlier era in South Florida history, and hopefully will remind people of what the placed used to look like.  The Unix Era started 1 January 1970; that should give you an idea of the vintage of these photographs.  I took some of them but not all.  Enjoy!

Below: A “bird’s eye” view of Miami in 1962. The main inlet is Government Cut; the large sandy island on the south side is Dodge Island, being transformed from a natural island (such as Fisher Island, at the top right corner of the photo) to a man-made creation. Man-made islands fill the north end of Biscayne Bay, as you can see to the left of Dodge Island. In the back is Miami Beach, better known today for its “South Beach,”, the diet and the exposure that results therefrom. (Photo courtesy of Aerial Surveys Inc., Miami)

A nautical chart from 1966 showing the same area.

From another viewpoint: driving pile to construct the first bridge to Dodge Island, with downtown Miami in the background.  This was commissioned by my family business, who furnished the pile driver.  Two years after this photo we relocated the headquarters of the business to West Palm Beach and moved to Palm Beach.One of the better shots of its kind, I used it in another publication, the vulcanhammer.info Guide to Pile Driving Equipment II.

No high speed chases here: Old Port Cove, the large marina and condominium facility north of West Palm Beach, employs the use of a Ford Pinto to patrol the premises, as shown in this 1974 photo. With its 1.6 and 2.0 litre engines, the Pinto wasn’t very speedy to start with, but with its particularly explosive rear gas tank, it was a gamble to ride in. (For another Pinto photo in South Florida, click here.)

Above and below: a view of South Florida’s vegetation from a golf course, in this case the Ocean Reef course on Key Largo, in 1970. Note how brown the fairways are. South Florida usually averages about 55″ of rain a year, but the late 1960’s and early 1970’s represented a time of drought. The Everglades burned, and people started thinking about what was really happening to the region.

Nasty weather coming up over Coconut Creek, August 1978.  Those afternoon showers (especially in the summer) are a part of South Florida life–when the rain is normal.  Photo courtesy of NOAA.

Looking for more nasty weather: a hurricane hunting plane flies over Ft. Lauderdale on its way to the Bahamas, September 1964.  Photo courtesy of NOAA.

More construction: installing the foundation for an expansion to the Cadillac Hotel, Miami Beach.  This photo ended up in my family business’ literature.

Below: a “back forty” in Boca Raton, 1972. The slash pine scrub dominated much of Palm Beach County on both sides of Florida’s Turnpike until development swallowed it up. The irony is that much of the scrub was made possible by the drainage done by what was then called South Florida Flood Control, which converted it from the Everglades with canals like the ones you see in the photo. It is also interesting to contrast this with the Ocean Reef photos to show that a region that one would think is “homogeneous” in terrain is so varied in its flora.

One use of slash pines was their sap; it forms a very hard resin that is useful for caulking wooden ships. Unfortunately, if you park your car below one (as we see above,) you’ll end up with rock-hard drips of the sap on the car, which are next to impossible to remove.

Some issues just won’t go away: A St. Andrew’s School sophomore points out the obvious Confederate flag on the wall of a dorm room while his classmates (one American and one Bahamian) have a good laugh at his expense. This appeared in the 1971 Tartan (St. Andrews’ yearbook.) It is doubtful that this product of a very liberal (then and now) school would pass muster anywhere in the U.S. today.

More scrub, this time on Powerline Road, August 1973. Starting in Broward County, it extended into Palm Beach County, but only as far as Boca Raton Road. This was probably taken close to that ending. All of this, of course, is now developed.

The rapid change in the region was probably a spur to me as a Christian; faced with a landscape that developed so relentlessly make me think of something that was more permanent and eternal.

Some of the human landscape: Grace’s Food Store, on the corner of NW 20th St. and NW 2nd Ave., Boca Raton, 1973. Their specialty was great Cuban sandwiches, brought by the hard-working refugees from Fidel Castro’s Cuba. South Florida was and is ethnically diverse, but the lack of community generally resulted in a juxtaposition of groups that basically didn’t like each other rather than a region united in its variations. 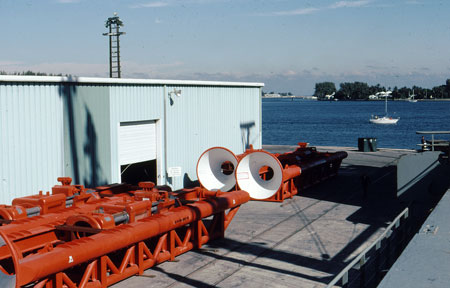 Left: Looking outward: a view of the Palm Beach Inlet from the Port of Palm Beach, mid-1970’s.  At the time the Port was mostly for freight, which our business used to ship its product (sitting on the dock) throughout the world.

While loading the product on a ship, a view of a South Florida landmark now gone: the smokestacks at the Port of Palm Beach’s FPL power plant.  Lacking a lighthouse, the smokestacks were a useful aid to navigation for those who preferred (or had) to look at where they were going rather than at their GPS.  But the oil fired plant was replaced, and the smokestacks were demolished in June 2011.

Pompano Fashion Square, August 1973. Shopping malls were especially useful in South Florida due to the hot, rainy and humid climate. In the back is J.C. Penney’s, itself a survivor of the many upheavals that have taken place in American retail.