This post is something of a departure, in that it features the pencil sketch art of my great uncle, William H. Warrington (right, from his carte de visite.) But first some background is in order.

William H. Warrington was born 17 September 1846, grew up in Chicago, Illinois. He became the manager of the Vulcan Iron Works, the family business. Although he was very prosperous in business, he had an artistic side to him, and here we’ll present some of his pencil sketches. As is frequently the case in my family, I don’t have much “backstory” narrative for these, but what I do know I will share.

As best I can tell, most of these date from the 1860’s, when he was in his late teens. Some have an English or Scottish settings, and this may be from travels in the British Isles. His father Henry was an immigrant from Manchester, England, and his mother Isabella McArthur Warrington came from Scotland. Both made return trips to their native land; Henry in fact did not become a U.S. citizen until 1870, almost thirty years after he first came to the U.S.

Signature card for the seniors of the Chicago High School, 1864. William H.’s is at the lower right. 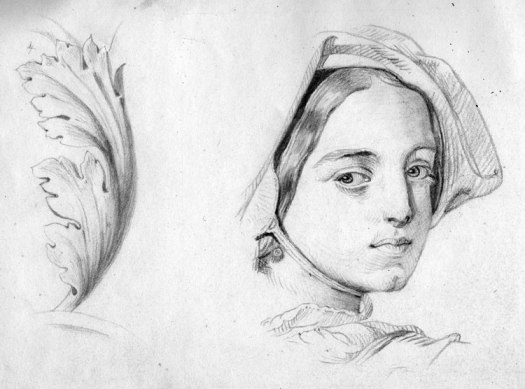 Above and right: Two studies of young women.

Below: large house plans, 1860’s style. The various rooms of the house are as follows:

Winter Quarters. A reminder of the great Civil War that was going on to the south. William H.’s father was busy producing cannons and cannon balls for the Union, while his uncle, Union general John McArthur, was leading the “boys in blue” at places like Shiloh and Vicksburg. His nephew Chet married the daughter and granddaughter of Confederate veterans, who had an entirely different view of Mr. Warrington’s products and relatives!

Sketch from Nature? An odd title, but it’s a nice view of the plank sidewalks that were current in his day.

Rowing has come a long way from this bucolic view.

Although it’s tempting at first to place this in Europe, the American flag gives away which side of the Atlantic it’s on.

Looks to me like something out of Lord of the Rings, but being nostalgic about English country life (and, indirectly, that over here) was one of the reasons J.R.R. Tolkien wrote his masterpiece.

The house where William H. actually grew up, in Chicago. (A later photo is here.) Note in the lower right hand corner the unusual way the artist “signs” his work.

3 Replies to “The Art of William H. Warrington”