What a “college man” used to look like, in this case my grandfather, C.H. Warrington, who is at the right. He started out at the University of Illinois but ended up at Lehigh, where he graduated with a Civil Engineering degree in 1912. (It was another eighty-five years before a member of the family would obtain another civil engineering degree.) 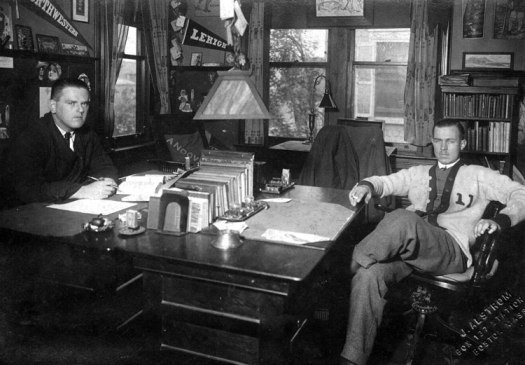 Lehigh is best remembered in engineering academia as the birthplace of Tau Beta Pi, the premier engineering honour fraternity, and gave the fraternity its seal brown and white colours. However, my grandfather wasn’t the Tau Beta Pi type, let alone a member; he was more comfortable with what was referred to as the “Gentlemen’s C.” My experience teaching has informed me that the Gentlemen’s C is very much alive and well in engineering!

Speaking of engineering’s premier honour fraternity, below is an account of the founding of Tau Beta Pi, from the 1912 Epitome, Lehigh’s yearbook (pp. 199-200):

THERE exist in the college world three well-known societies, membership in which signifies college honor, in the manifestation of high scholarship. They are Phi Beta Kappa, Sigma Xi and Tau Beta Pi. The first of these finds its membership in the men pursuing literature and the arts. The second selects its men from those who have shown distinction in the sciences and who have performed some research work. The last, Tau Beta Pi, of which we write, enrolls the honor men in engineering courses. Of the three Phi Beta Kappa is the oldest, having been founded in 1776, while the dates of founding of the other two were separated by only one year-Tau Beta Pi, 1885, and Sigma Xi, 1886. The existence of Tau Beta Pi is owed to Prof. Edward H. Williams, Jr., an alumnus of Yale and of Lehigh where he became Professor of Mining Engineering and Geology. The motives leading to and the circumstances attending the formation of this society are interesting and worthy of record in a book of this nature.

As valedictorian of the class of 1875 at Lehigh, Prof. Williams had been elected an honorary member of the Sigma (New York) chapter of Phi Beta Kappa, and was anxious for the establishment of a chapter of that society here. There were, however, two obstacles standing in the way, first, the fact that the council, in whose hands the granting of charters lay, met only once in six years, and, second, the strong objection in Phi Beta Kappa against the admission of technical men into its membership. Owing to the highly technical character of Lehigh’s courses the likelihood of an establishment of a chapter here was very slight and even with a charter granted the membership would be confined to a very small number.

Prof. Williams was aware of the necessity for the recognition of a man’s ability other than the diploma which he received, and further that the recognition should be given while the man was still at college, and not as he was just passing out through her portals. The attitude which some men had towards a diploma can best be shown by the following incident: As the valedictorian of one of the ’80 classes came from the stage after graduation Prof. Williams congratulated him, to which he received the reply” …… ‘s got one too.” The fellow in question had flunked every examination in his four years of college. There was no limit to re-examinations in those days and he had taken enough until he had passed.

These were the motives leading to the formation of the society. The details of organization are briefly given as follows: Prof. Williams’ conception of the society was that its membership should be taken from those men whose grades showed them to be in the first quarter of the class. Their rating must be above 75% and they must have no conditions. In practice this was to work as follows: At the end of their Junior year the men standing in the first eighth of their class became eligible for election and at the beginning of the Senior year the first quarter of the class became eligible. The election of these men, however, was not to be on the basis of scholarship alone but in addition the men must possess high morals, qualities of good fellowship, and manifest a healthy interest and rational participation in college activities.

To start such a society so that election into it would be sought and so that its .establishment would be firm and give promise of vigorous growth was a matter requiring much careful work. How this was accomplished is best told in Prof. Williams’ own words, and we quote from a letter from him on the subject, giving the Editor of the EPITOME this information on request.

” …… Now, too many cooks spoil the broth of society building; so I decided to take nobody into my confidence. I knew what I wanted and I went to work alone.

“I first drew up a constitution and provided for granting new chapters, for an executive council, and for alumni advisers to act as a balance wheel to keep things going in line, and I made it hard to amend this instrument. I then drew up By-laws for Lehigh.

“Next, there must be a body of alumni behind the affair before the first undergraduate was let in. I delivered the valedictory for ’75 and so was eligible to the society. I took the old faculty records and calculated the standing of every man who graduated, during his four years; drew up a list of the men in the order of their stand. They must be in the first fourth of the class and also have a general average of 75. Having the eligible men of the past, I had Edwin G. Klose, of the Moravian Book Concern, buy a series of special fonts of type, which are now in the possession of the society, a lot of electrotypes of the society key, and some other matter and print a lot of diplomas. . ….. I signed them as secretary, to which office I elected myself. The answers I received from the boys were refreshing. One valedictorian said he would value it more than his diploma.

“Then I had my friend Newman, of John St., New York, file out a society key, to see how the thing looked. Then I was ready for the undergraduates. I went slowly, however, and it was May, 1885, before I told Irving A. Heikes, the best man in ’85, to stop after recitation, one morning, and asked him if he would like to be the first undergraduate to join a society. He wanted to think it over, and finally said ‘Yes,’ so I initiated him. He took post-graduate work, I think, and in the fall he and Professor Meaker, who helped me initiate the classes for several years, and Duncan, ’80, initiated the men from ’86 and the Wilbur man from ’87.

“For several years I was elected president of the society and directed the body till it began to have a good number of alumni and many representatives in the Faculty. It took like hot cakes and soon its elections were looked for. “I wanted to have Tau Beta Pi in full blast before Phi Beta Kappa came, as it would not then be looked upon as an imitation by a lot of men who could not get into the latter. In deference to the general tradition I limited the membership in Phi Beta Kappa to students in the liberal courses, and I had the charter given to a council of a few graduate members, Mr. Kitchel, Albert G. Rau, myself and a few others.

“This is the way Tau Beta Pi came to Lehigh. It was the culmination of a lot of work covering four years. I could not give as much time to it as I wanted, owing to the growth of my department. Breckenridge was elected an honorary member. Heck became president and a ‘member of the advisory board, and then it began to form chapters outside. While the founding is wholly my own unassisted work, the spread is due to others …….. “

In June, 1910, the society had a membership of 3680 divided among 24 flourishing chapters, located at institutions of acknowledged leadership in the instruction of engineering. The twenty-fifth anniversary was celebrated here at Lehigh last June and the attendance and enthusiasm in connection with the convention gave every evidence of the solidity and prestige of Tau Beta Pi. J. L. B.